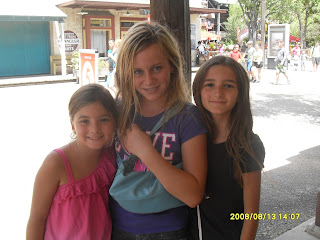 This summer I went to  Fiesta TX twice!

If you had told me years ago that one day I would be going to theme parks, I would have laughed in your face.
Never!!!

Ethically I don't agree with them. They are, in a word, wasteful. A waste of time, electricity, and money.

Well, there is nothing like a child  begging to go  ride extremely dangerous rides to make this parent say Yes!

After I have said "Yes" I immediatly start to look for an excuse to not go... but of course I have to. It is
a sort of pattern with me to say the easiest thing at the time and then to work on getting out of it.
Not so easy with Juliette. Of course we went.

The first time we went this summer, one of the employees congratulated us for coming on the hottest day of the year! Gee thanks! good for me.

For instance, the parking will cost you 17.00 for the day. If you decide to treat your child to say a cold drink it will start at 3.00 from the machine. These are the same machines that cost 1.00 on the outside world. Theme parks operate in the world of hyper inflation. Why a beer will run you close to 8.00!(which actually begins to sound like a bargain).
Although I must say they will fill your water bottle with ice water if you ask, (I have wondered what sort of horrible scene led up to that decision).

Speaking of horrible scenes, at this theme park there
are cartoon characters walking around waving and taking photos with people. Now of course these are people inside very hot costumes, people who must need
the job very bad, because it has to be at least 10 degrees hotter inside those costumes.... seeing those
poor people just makes me worry.. I mean they are some ones kid in there. Oh well I have noticed they are usually attended by someone to lead them to safety and cool water (what a relief).

Any way, I did it!! The girls had such a good time.
All they saw was the fun!! It's nice, I am glad we went, and now that it is over I can almost think about doing it again... almost.
Posted by Unknown at 9:52 PM No comments:

Every time we have a bull calf born here at Novellas Farm, I fret about what to do. Keep him intact and try to   sell him or have him steered and eventually processed.

Last week I had to make a decision concerning  Scout. I had him listed to sell as a polled Mini Jersey bull, I even had a home secured for him in Colorado.

Then one morning we saw horn buds! Instantly his chances of being sold intact fell.... the buyer withdrew their offer.

Scout had been acting like a little cuss, and
I knew what was coming (lots of very aggressive behavior). So I made the appointment and had him steered and dehorned.


I thought he would be polled (hornless). Which is a good thing for a bull to be, since most people wanting a bull would prefer to not be gouged. Obviously if the bull is horned he may sire horned offspring, which most people do not want.

So... it is very hard to sell a bull with horns because you know for certain that 100% of the time he
will be contributing the gene for horns, and although it is recessive, if your cow carries the same
recessive gene you can get a horned animal. Which is OK if it is a heifer but not OK if it is a bull.
And for the record you can not have a bull around if you want to be able walk freely around your property and not be hurt or killed.

In fact Jersey bulls are very dangerous, and Scout was getting to be a bit  rambunctious lately.
When you have to break a large dowel on an animals head to get him to budge something must be done.

Still, the whole thing is strangely reminiscent of One Flew Over the Cuckoos Nest. He is not the same little wild man, running around bucking and knocking things over, making me run into the barn. He is actually very calm. I expect he will get fat.

For a bull, getting castrated (there I said it) is the equivalent of a lobotomy. I can't say I feel happy about it.

Novella was happy to have him home,(she had been mooing for him for a while) she trotted (yes, she trots) up the hill and gave him a full body lick down. He just stood there in a stupor.

That is the one bright spot, Scout
gets to stay with his family and not move away.