Ok so today I had this great idea.
I thought, well I can't have farm days, but I have lots of good product, I'll try to sell some!

So... I called a very well known nursery in Austin ....
and asked the woman who eventually answered, after I moved up the "queue" of calls,
I said " hello, I would like to bring over some worm casting I am trying to sell and see if you would put them in your store to sell for me."
She responded with "we have worm castings"
To which I said " oh.... you don't want to carry any more?"
she finished up with a  firm "no".

Now I have to state here for disclosure reasons, that at one time years ago I applied for a job there, and was called in for what I must say was a ridiculous interview.
I was not asked once about my education, my experience with plants and growing, I was however asked
what a person who had worked with me before would say if asked what my worst work qualities were.
I basically walked out.
I have a Bachelors in Science, I had my own gardening business, I run my own farm, I worked in the
greenhouses at A&M for  years . None of which I was allowed to expand upon.
So when I got this response from them over the phone I was not too surprised. They do however, know how to run a very successful nursery.

What I decided to do is to list my products  and services here on my webpage.
I am in Austin all the time and can always work out a meeting place, or you can  pick up out here.

BEE Hive Set up and Help:
Have you wanted to get a bee hive but just don't know where to start? Well now is the time to
get busy, Contact me if you are interested and we can talk.

I will help you:Order the bee packages, choose your supplies, put the boxes and frames together set the
hive boxes up. If you need help with installing the package of bees I can help with that too.

Pictures of these products will be up in a day or so along with more!

Posted by Unknown at 1:56 PM No comments:


I saw this in another blog and just had to share it....
I am curious to know what you all think of it.
Hope it is not too much of a shocker  as it has nothing to do with us, except that I wonder about
what is happening to the human spirit.

Please read and share your thoughts.
Thanks,
Amy & Novella

"A pair of identical twins, who were born deaf, have been killed by Belgian doctors after seeking euthanasia when they found out they would also soon go blind.

In a unique case under the country's euthanasia laws, the 45-year-old brothers, from Antwerp, chose death as they were unable to bear the thought of never seeing one another again.

They were euthanised by doctors at Brussels University Hospital, in Jette, on December 14 by lethal injection after spending their entire lives together.

Euthanasia is legal under Belgian law if those making the decision can make their wishes clear and are suffering unbearable pain, according to a doctor's judgement... But this case was unusual as neither twin was suffering extreme physical pain or was terminally ill." 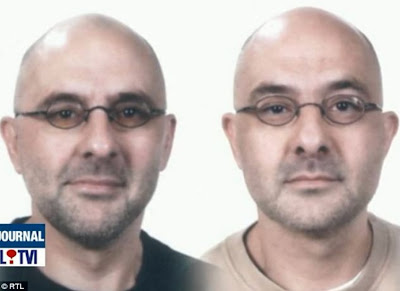 And later in the article: "Just days after the twins were killed, Belgium's ruling Socialists tabled a legal amendment which would allow the euthanasia of children and Alzheimer's sufferers."

This discovery had been made by accident, the cows began to understand that on a certain day the woman and girl would leave in the afternoon, always in a rush.
Then a while later the boy people would begin to feed the chickens, water all of the animals and try to convince the dairy cows to go into their pen and lock the gates behind them.

The animals would hear the boy people yell at each other, run out with orange balls and jump into the large green car. They would tear out the driveway, race down the road..... and then nothing.
Silence, no voices heard.... until much later, when the woman and girl would come home, go into the house, change and come out with lights to check on water and food for all. So although the day was not routine,
it became part of the anticipated cycle and the animals were content with the arrangement.

Now the woman and girl would race out each Thursday and go into the nearby city to shop and take the girl to her choir practice. So usually they would be home at close to the same time
each evening.
But one evening on the way back to the farm there was a terrible accident, now the woman and girl were not involved but the traffic delay was 2 hours!
Novella began to listen for the woman at the expected time, but heard nothing. She waited and listened.
"Quiet Mattie!" she mooed." I am trying to listen I can not hear over your lip smacking".
Mattie tried to control her self " sorry, but I'm so hungry, where can they be!"
"maybe they are gone! and never coming home and we will starve!" Sunny bawled.

"Calm yourself heifer" Novella snapped. " I have known the woman for a long time, she will not forget us, No she must be in some sort of trouble. I am sure of it. And here we sit, or lie, not helping at
all!"

She began to pace the pen,
"That's it, If the mountain will not come to Mohammad, Mohammad will go to the mountain" said Novella
"What are you talking about?" Mattie questioned

Novella did not answer, she headed to the gate and walked through it.
"Oh boy!! said Sunny " let's have some fun!"
"Finally" said Mattie.

The three rather large sillhouettes headed down the road. They made poor time, what with all the distractions.." oh so much grass" they all burped.

Several hours later the woman and girl headed down the road, "Mom, what is that!" asked the girl.
As the headlights illuminated the 3 escapees, the woman said " oh my! thank goodness they're alright! those boys must have left the gate open!"

"Don't worry mom, I'll get mad at them for you" offered the girl.

The three cows ran in after the woman and girl.
As the woman got out of the car, Novella sighed, "good"

The three girls went to the pen and the woman brought food and pats all around.
"Goodness, if I didn't know better I would swear you were waiting for us!"
Novella just stared at her.
Posted by Unknown at 8:54 PM No comments: 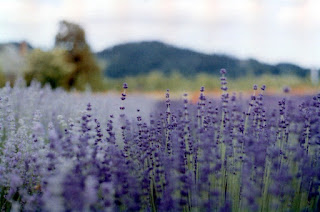 Today my husband, Jerry and I went to look at a piece of property in Johnson City.

It was a  Lavender Farm, there was about 3 acres of  lavender planted. All together it was around 12 acres.

There was the small field of lavender ( this is not a photo from the farm), a butterfly garden, a fenced black berry patch and a little shop area.

The owners had worked so hard! I have a place in my heart for folks who work like this, mainly because I have firsthand knowledge of what it takes to fence, and plant and build and water. Just the transport of the materials is exhausting.  I felt like crying to think they had worked so hard and were giving it up.

I kept thinking about the heat... the sun and the heat. I have the feeling that a Lavender farm in the Texas hill country is a hot, sunny place.

The place was  intriguing  because it is already somewhat tamed, and there is electric and a well, it is totally fenced, ( for my cows) and it is along the Blanco Lavender route.
Oh yes, and it is Ag Exempt. That magical ranking that makes a property look pretty darn good.  I believe the taxes on the this place were listed at around 16.00 for last year.
Yes you read that right. Amazing, yes?

The down side? No house and I just don't know if I can do that again. Another
construction project? I fear I may kill someone if I am put in that situation again. No kidding.
Oh yeah, and no septic.... another project that I don't look forward to repeating again...

I don't know if I mentioned that Jerry and I have never actually looked for property, we have til now, either bought the house we were renting ( as in Austin), or decided on the first place we saw ( as with this present house) or just purchased because we liked the area ( as in raw land). Never before have we actually looked,
like normal people for the right place.

When we moved into our present place it was a real dump, but the yard was so pretty. Our kids could not
believe it when we told them we were moving. So when I mentioned to my son a few minutes ago that we looked at a piece of property today, I saw him tense up. Then I said " it doesn't have a house" he was just
quiet, til I said "we aren't doing that again" and he laughed.

I'm finally getting it right.


Today was one of those beautiful
days that make you forget the days earlier in the week when you wanted to just stay inside and do nothing.

Well nothing except sit by the heater and count your blessings that you aren't a chicken or cow out in the wet, cold, muddy weather.

My bedroom faces east towards the back so the rising sun woke me this morning, how wonderful!

The change in weather was like a dose of medicine for us all,  the dogs slept in the sun, the cows jumped around and ran, the chickens stretched out their wings in the sun and of course the bees finally left their hive.

Bees are kind on weird animals to take care of, I mean you do have to feed them and check on them,  but only if the weather is right.
So what usually happens is I will  put my ear up to the hive on
those cold stretches and try to hear them. I never can, it is dead silent. Which always worries me, are they gone? are they starving?
Poor babies I should open the box and check on them...
But I can't do that, they need to retain their heat in the box, opening it up would be very hard on them.... so I just have to wait.

I  keep them covered with a tarp on  cold nights. I also put sugar and water in the hive for them to eat. Otherwise I have no idea how they are....  The thing is, with the internet I will be reading bee keeper blogs and come upon a post the says "my whole hive is dead" and I think.... "my whole hive is dead".

So today I got to see them again. They were out swarming all around their hive, drinking water enjoying the sun.... I love those little guys... I mean girls.

I want to say "Thanks "to everyone for their support of Novellas Farm and continuing it.

For now I  am working on a business plan and researching funding
possibilities. I got some wonderful information about The City of
Austins'  Small Business Development Program from a delightful
blog called, "Jack and the Tealeaf"
Check it out,
May your dreams come true.