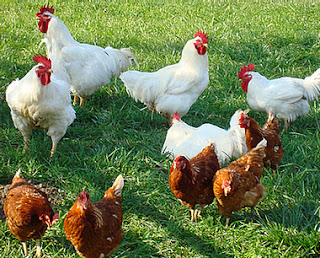 Every so often we order “meat chickens” here on the farm. Now, if you have never been exposed to chickens, you may be surprised to find out that there are basically two types. The lucky and the unlucky, so to speak.

The lucky chicken is a “layer,” and as its name implies, it is raised to lay eggs. The unlucky chicken is known as a “meat chicken,” and these poor birds have been genetically crossed or hybridized to create the perfect chicken for eating.

When the chicks arrive from the hatchery, they are all equally adorable, cheeping, tiny balls of fluff, but over the course of only a few days their differences becomes obvious.

The little meat chickens are bred to have an appetite that just can never be satisfied, they are literally bottomless pits. They will trample anything that stands in their way of food. They just eat, and eat, and eat….. but a few months ago there was one chick who was different.

This little bird came to us missing her top beak. I noticed her and thought, we should just put her out of her misery, she’ll just starve, but we didn’t, and she didn’t.

She did the best she could do, shoving her way into the pack of ferocious eaters. Day after day she fought to get enough, and she did pretty well, but one day she decided enough was enough.

I was outside in the wood shop working on a project when she walked up to me. She was alone and she just stood in front of me and stared up. I knew what she was trying to tell me, so I got her some food, made it into a sort of soup and put her into a yard alone to eat it. She ate and she looked at me gratefully (or so I imagined).

Then every day, several times a day she would find me where ever I was and I would feed her, and as it would happen I began to feel very, very guilty.

My husband put into words my thoughts, “Are you going to keep her for a pet?” (a short lived pet!) You see these birds have short lives not only because of external causes (if you know what I mean) but because of their cross breeding – they just physically can’t live long.

One day she was missing. I looked for her, but she was gone.

My husband confirmed that one of the birds I had wrapped and put in the freezer was her, my little Smiley, that is what I called her.

Do I feel guilty? Well, maybe a little, but I am glad she ended up here at our farm. Did I love her as a pet? A little, but this is the way of farming, it is all bitter sweet.
Posted by Unknown at 12:18 PM