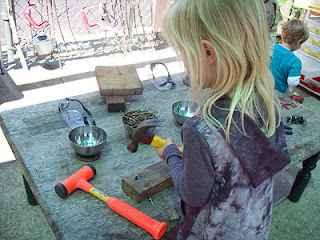 Last Spring I offered a 10 week session for kids aged from 8 to 12, we had 10 kids in all, 3 girls and 7 boys. Each day the children would help with the animals, work in the garden, do Art, build in Wood working. Then, at the end of the day, they would write about what the day was like for them.

In between all this they found time to build 2 forts (because girls like to have their own), fashion wooden weapons and other toys, play football, tag, and cool down in the hose on some hot afternoons.

I thought we were just having a good time. I thought this was just an opportunity for kids who live in town in get out of the city and run around and be loud or quiet, whatever they felt like doing. I thought I would just offer a time and place for kids to not have to behave, so to speak.

Little did I know I was putting into practice a concept of Montessori Education known as Erdkinder, which translates into “Earth School”. In case you are not familiar, Maria Montessori was the first physician in Italy, she was an Anthropologist and a keen observer of people. She is the originator of the Montessori method of education. Maria Montessori believed that between the ages of 12 to 14 children should be learning, not being taught.

Kids of this age should be growing food, cooking that food, building things… stuff like …. we are doing.

After learning about Erdkinder I started thinking about the kids who attended last Spring, some of them were younger, but there was one boy around 12.

The first day he stayed in the wood shop and built a bird house by him self,… during lunch. He was enthusiastic about the garden, tasting, asking about what this is, what that is. One day I saw him hauling cedar posts around to help the girls with their fort.

In short I saw the concept of Erdkinder actually working. His story is private, but his Mom said he loved coming out here, did he get in trouble some times?.. Yes. Was he always good? No. Would I have him back? In a heart beat.

Seeing kids really taking it all in, really benefiting from the freedom we have to offer here at Novellas, that is what motivates me.

When I see a kid here, a kid who earlier was ill at ease, felt confined in their own self, and that kid starts to run around and laugh and just explore …..

Well, I feel like the world is a better place.
Posted by Unknown at 12:20 PM