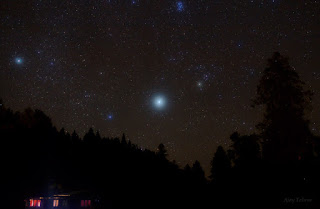 A few weeks ago I saw a post on my email for a
"Star Watching Party".

I thought to myself "That sounds so cool!"

I got in touch with Amy Jackson, the  woman who offers the parties.

I ran the idea of putting on a party out here in Novellas meadow.
So......
She came out one day with her daughter and we decided, yeah! Lets try it.

Amy Jackson is the founder of "Starry Sky Austin".
I'm going to say right here, she was younger, thinner and prettier than her facebook photos look.

And she was well, a bit odd. Which I mean as a compliment. I was very impressed with her. I liked her!

She is a science nerd, which I have missed a bit since leaving A&M. I have one other friend out here who is
a science gal, the soap maker who is a Chemistry nerd. It is hard to put my finger on what it is... but if you are a science major you are just of a certain genre.

Since I too am one of these science nerds I feel I can make the statement that we are all a bit odd, and somewhat out of place in the usual setting.
We are unmanicured, shall we say. Not as fussy about the natue, one foot in the civilized world and one foot in the real world.

I am thrilled to be able to have Amy out here to teach us all about the Starry sky. If you are interested in attending please contact me personally and I will fill you in.

We will have a fire, roast smores and hot dogs (not mandatory) and learn about the stars in the sky.
This party is of course, weather dependent... clear skies are mandatory.