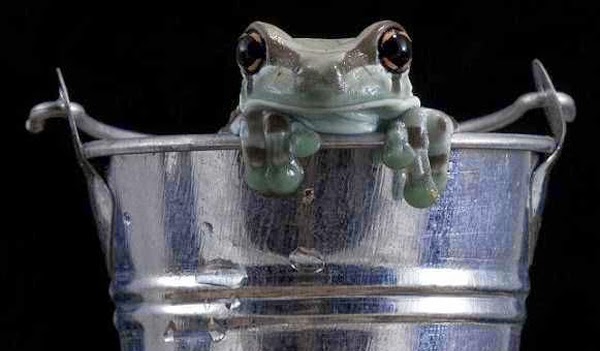 I believe I may have mentioned a time or two about the importance of temperature on milk... in fact along with cleanliness and animal health I would say it is the most important thing a person can do to insure milk safety.

Of course now a days we have the luxury of refrigeration. Myself I just stain milk into a stainless steel milk can, put it in the freezer to quick chill and then bottle it several hours later...

But have you ever been curious what folks did before refrigeration?

Well, there was spring water to place milk containers in and keep the milk safe, and caves... I have heard of
people storing milk in caves... and I understand the logic of both of these methods.

But keeping frogs in milk to keep the milk fresh?

What I don't get is how anyone came up with putting a frog in milk to begin with, it just seems like most people would prefer to keep frogs out of their milk.... Isn't it weird?
My son mentioned this tidbit  to me and I had to look it up.

After reading about it,  I understand how it works, the frog exudes peptides that inhibit bacteria and fungal growth... I just still can't imagine how anyone ever initially though putting a frog in milk could be a good  idea..

And anyway, even though the milk is "fresh" the fact is there's been a frog living in the milk...GROSS.
I just wonder how it started.... I think there's the makings of a great fairy tale somewhere in this froggy milk story.