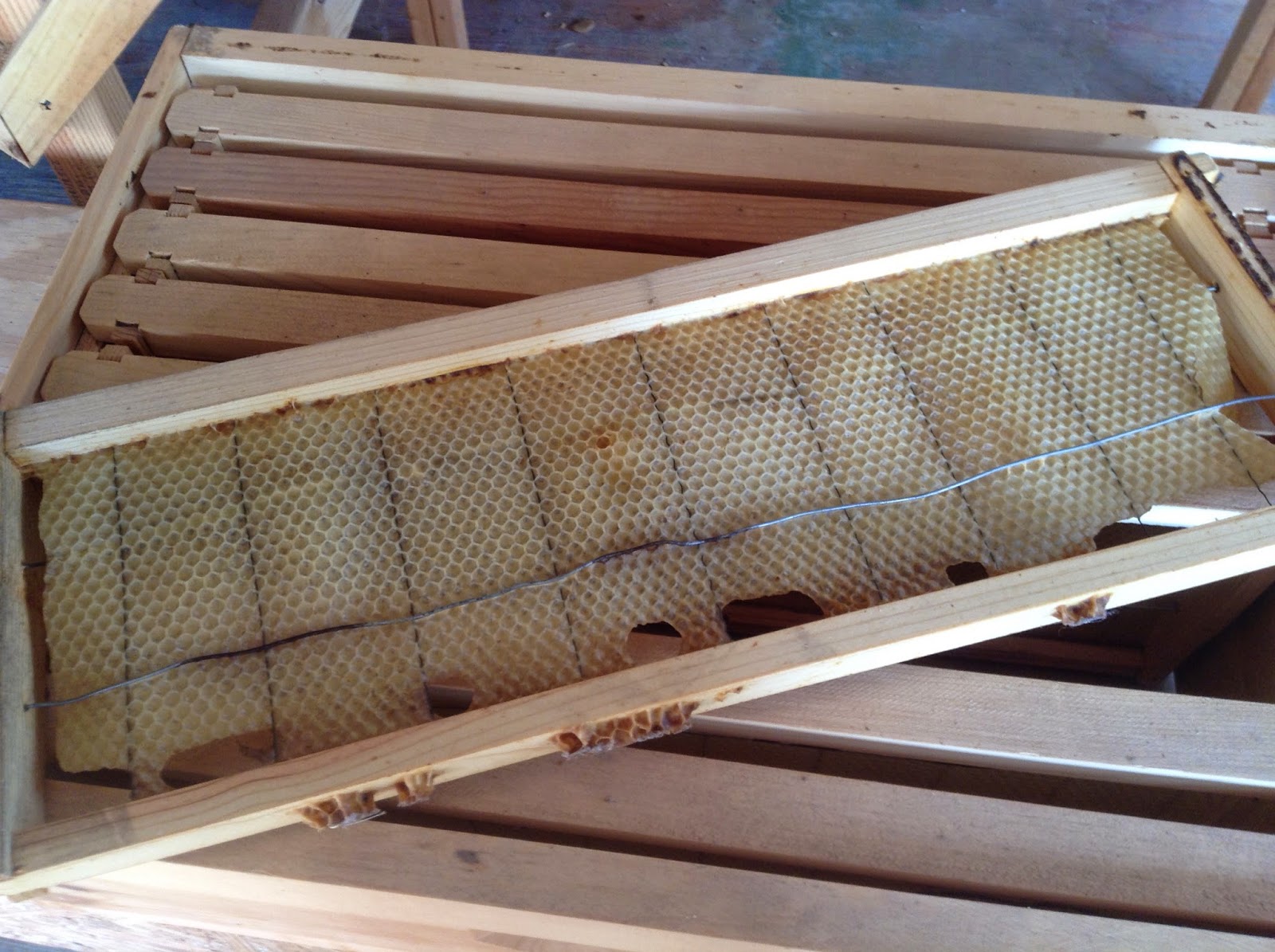 This week for the first time ever I harvested honey from my bee hive.

I could have probably done this sooner, except I didn't have my wonderful bee breeze bee suit til too late last year.. and it would have been suicidal to have attempted it with out proper attire.

Also I had to figure out exactly how I was going to
handle the procedure. 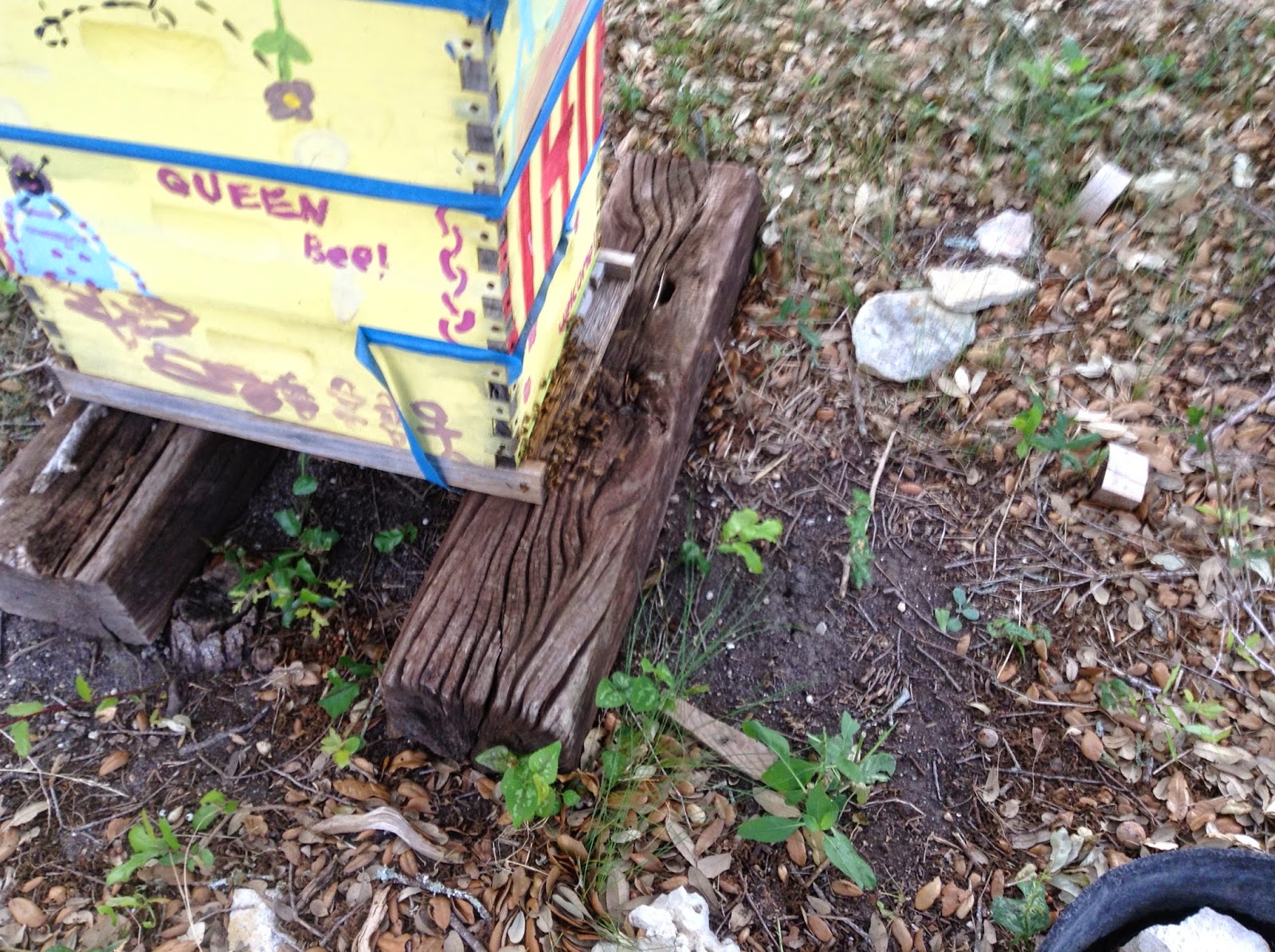 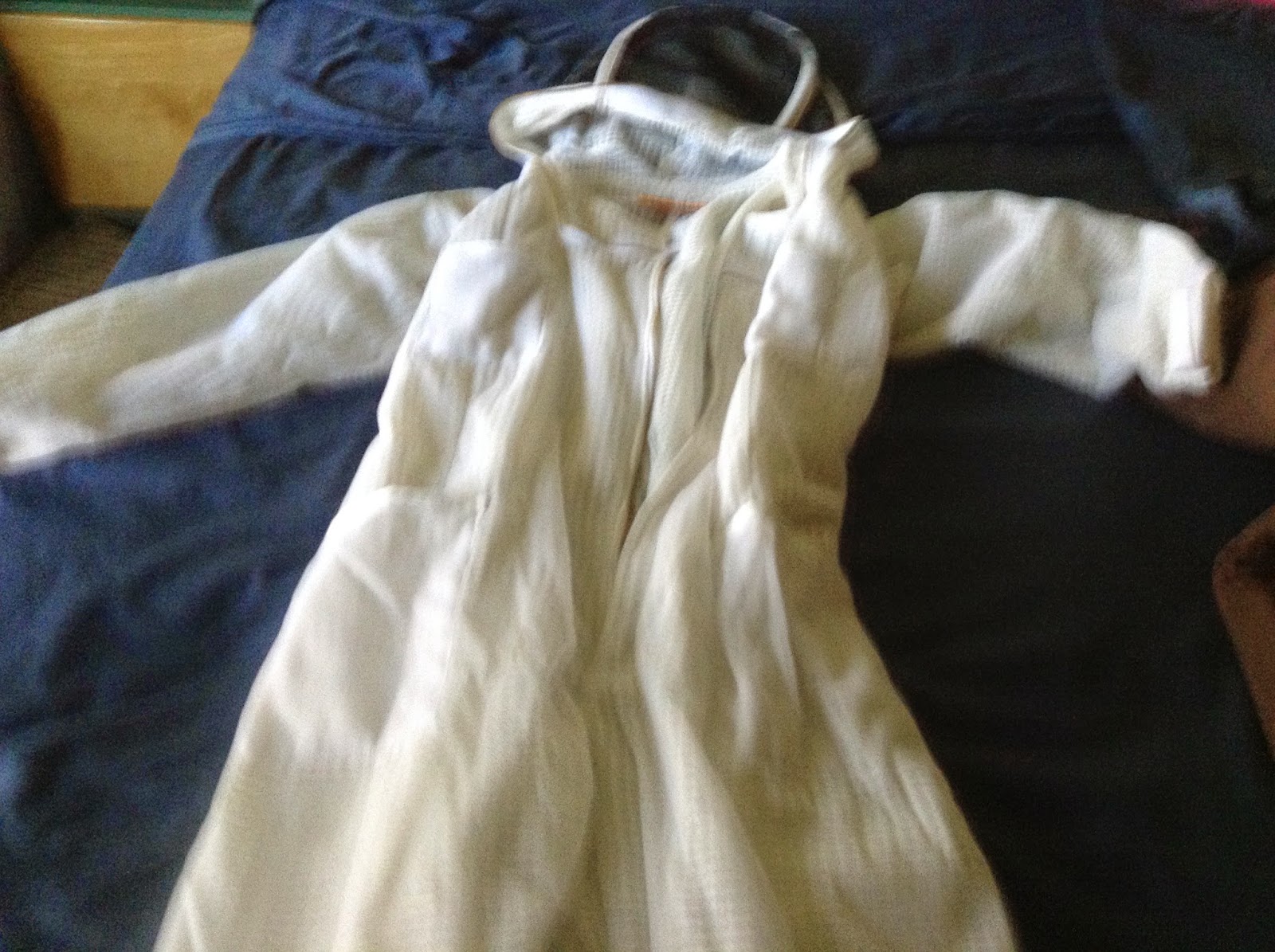 The first hurdle is actually getting the frames of honey into the house with out the bees coming along too.

The bee keeper then goes out and collects the
frames, takes them in the house or where ever the
honey will be extracted minus the bees.

It worked like a charm, and I have to say this
bee suit is the greatest thing since sliced bread. I
wasn't stung at all! In fact I'm getting Jerry one so he
can start helping me, you'ld be amazed how heavy the boxes can be with so honey in the frames. 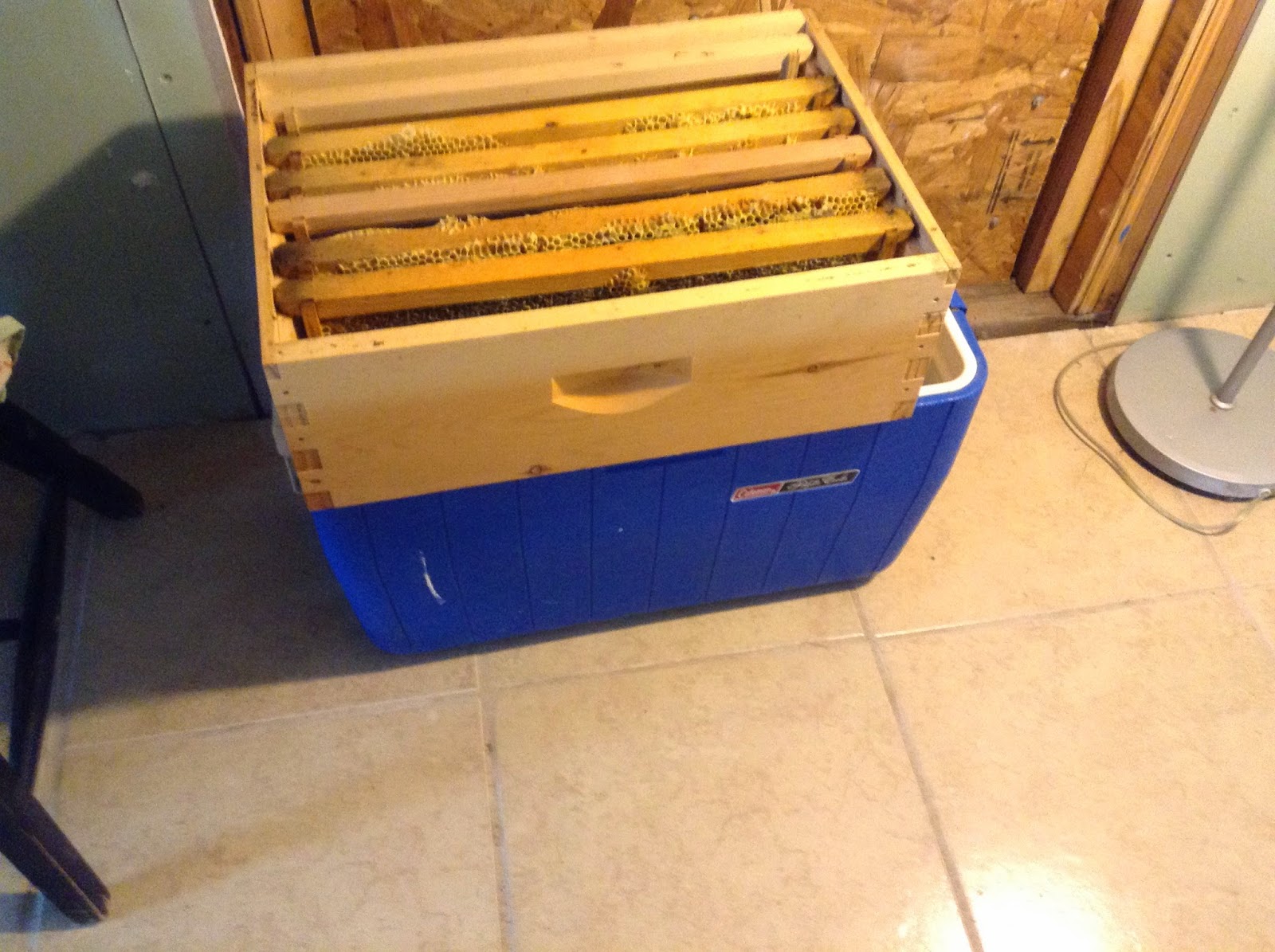 Here's the bee box with the honey filled frames
minus the bees in the house.
I put the box on top of  a ice chest to catch dripping honey. 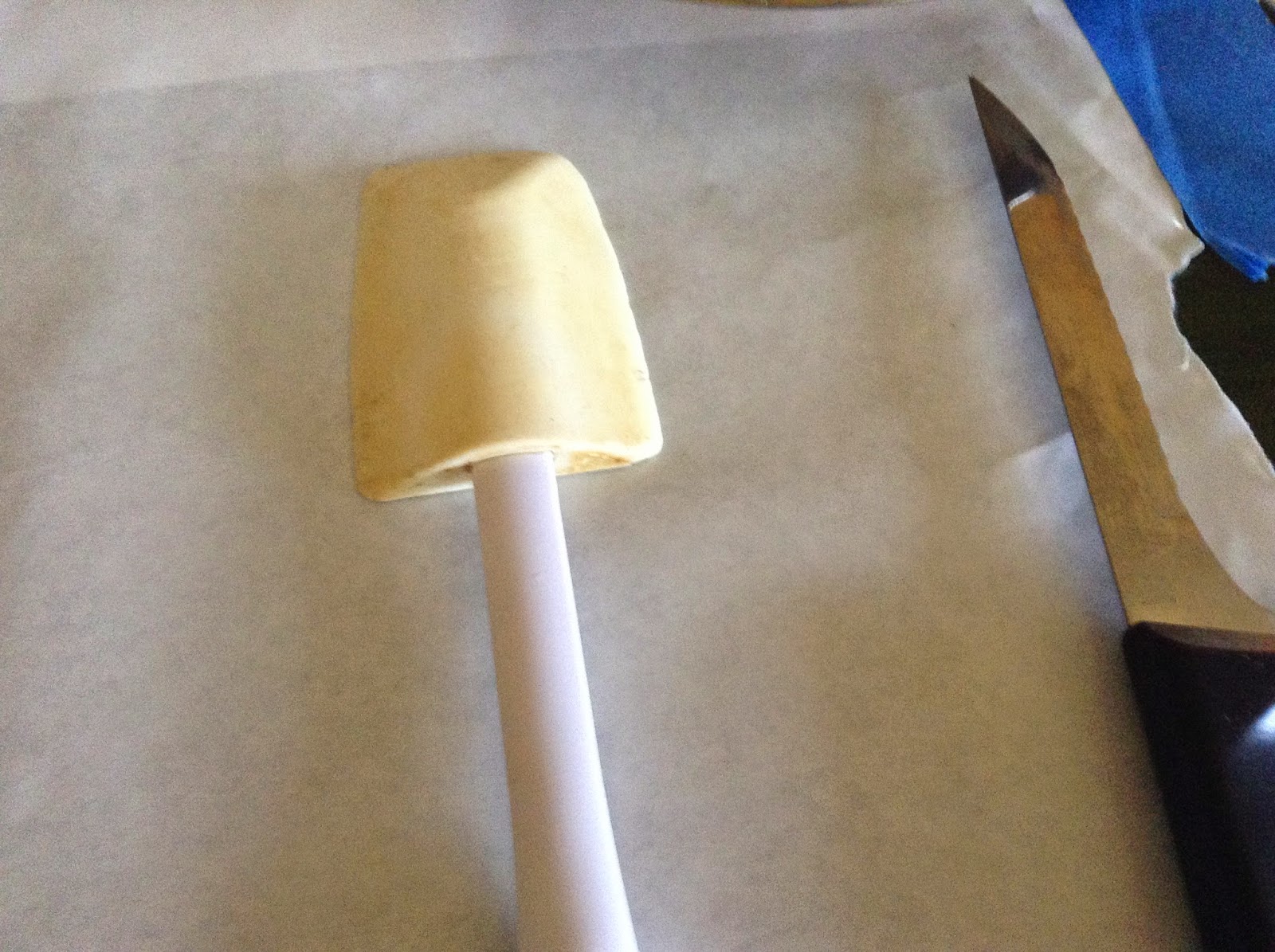 I  knew I needed to get started on the honey removal right away, so the next morning after I finished all my other chores I got busy.

I covered my counter with freezer paper,
I had a feeling it would be sticky.

I selected a knife, rubber spatula, 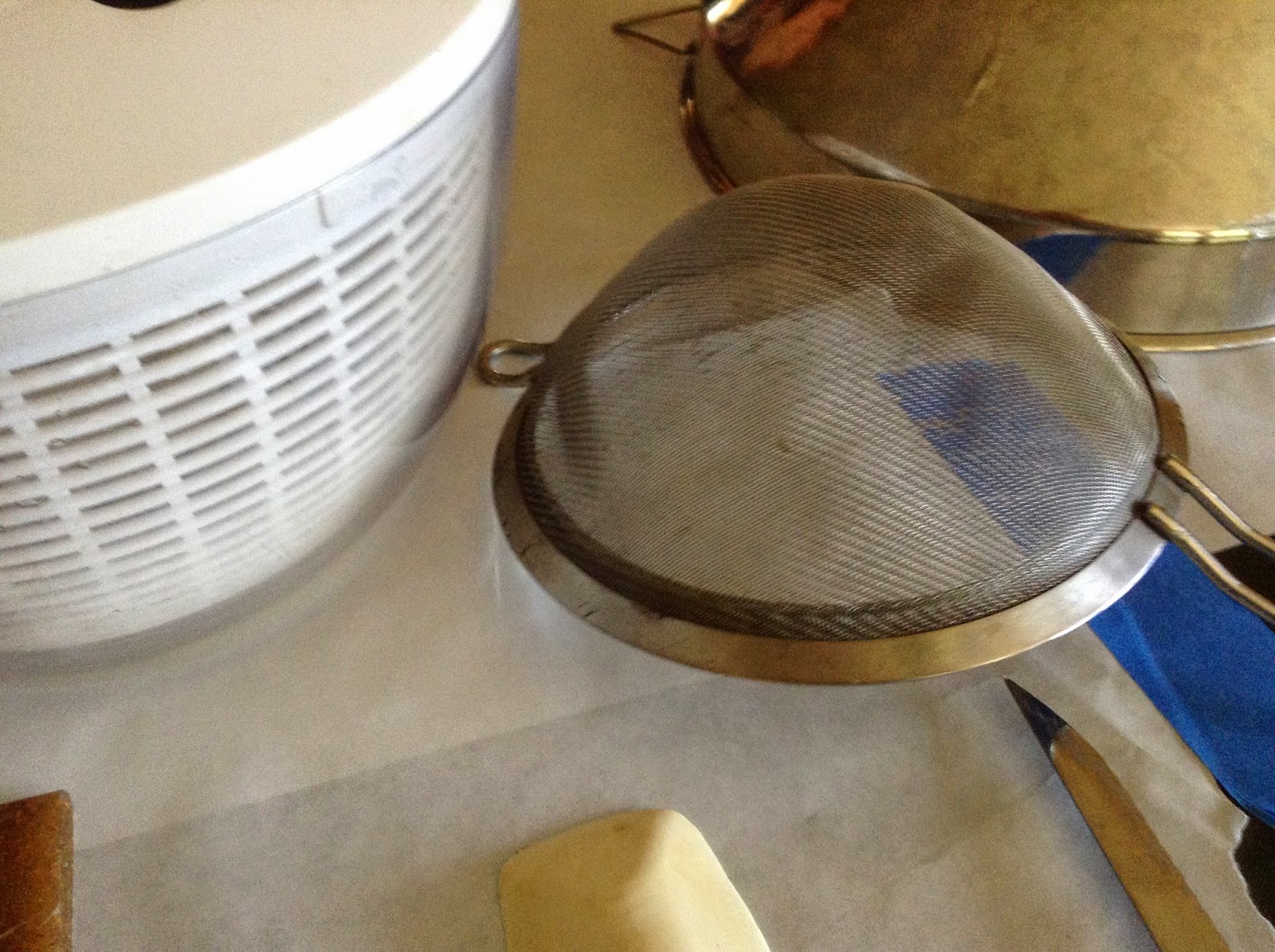 a strainer, a salad spinner... and just started.
Most people are fortunate enough to have an extractor but I reasoned that people harvested honey before the days of extractors so I would figure it out as I went along. 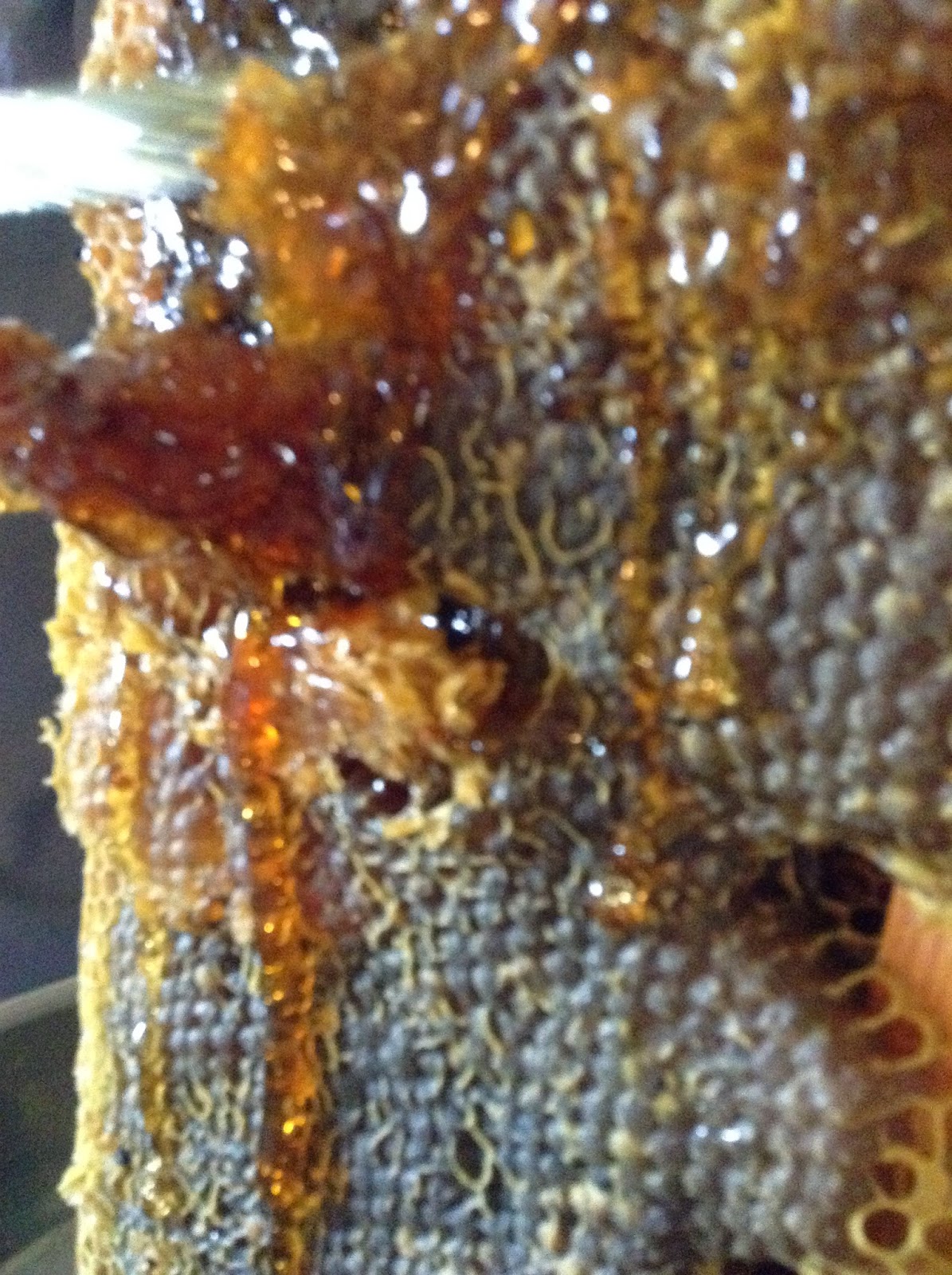 I started by cutting off the cappings, 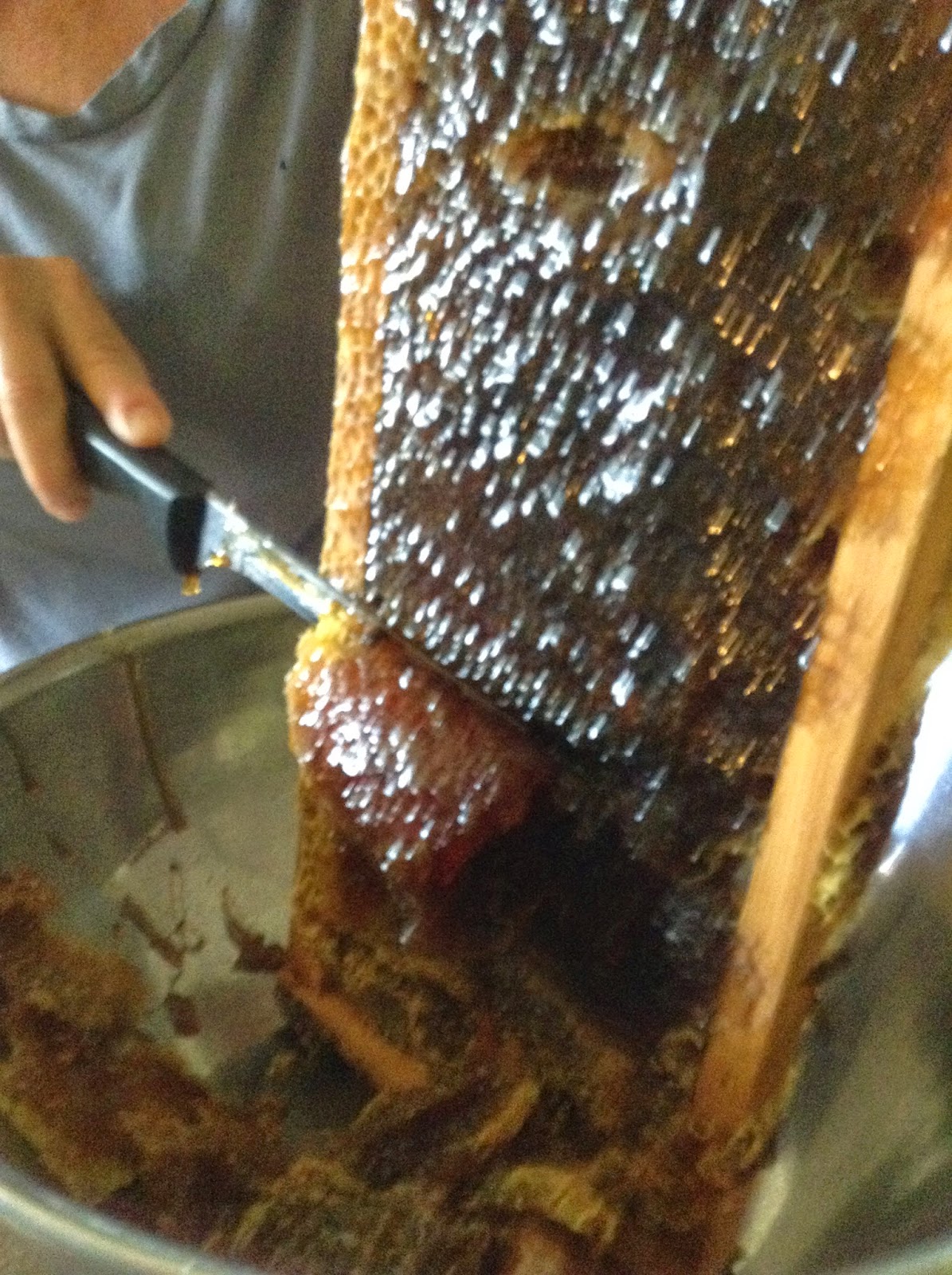 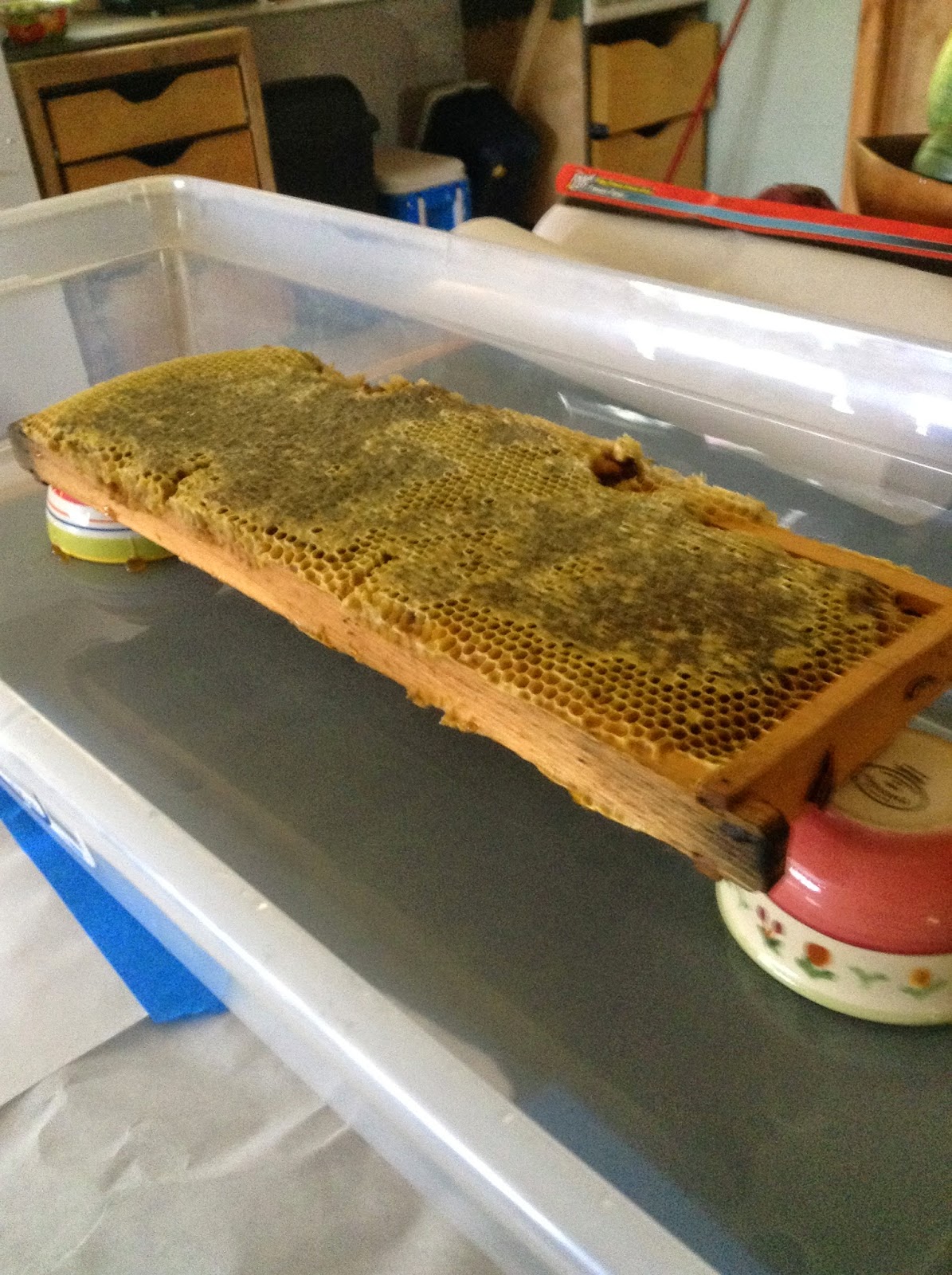 I initially thought the honey would just drip out ...which it would have .... just  not very quickly.. and  I didn't have
days to complete this job... 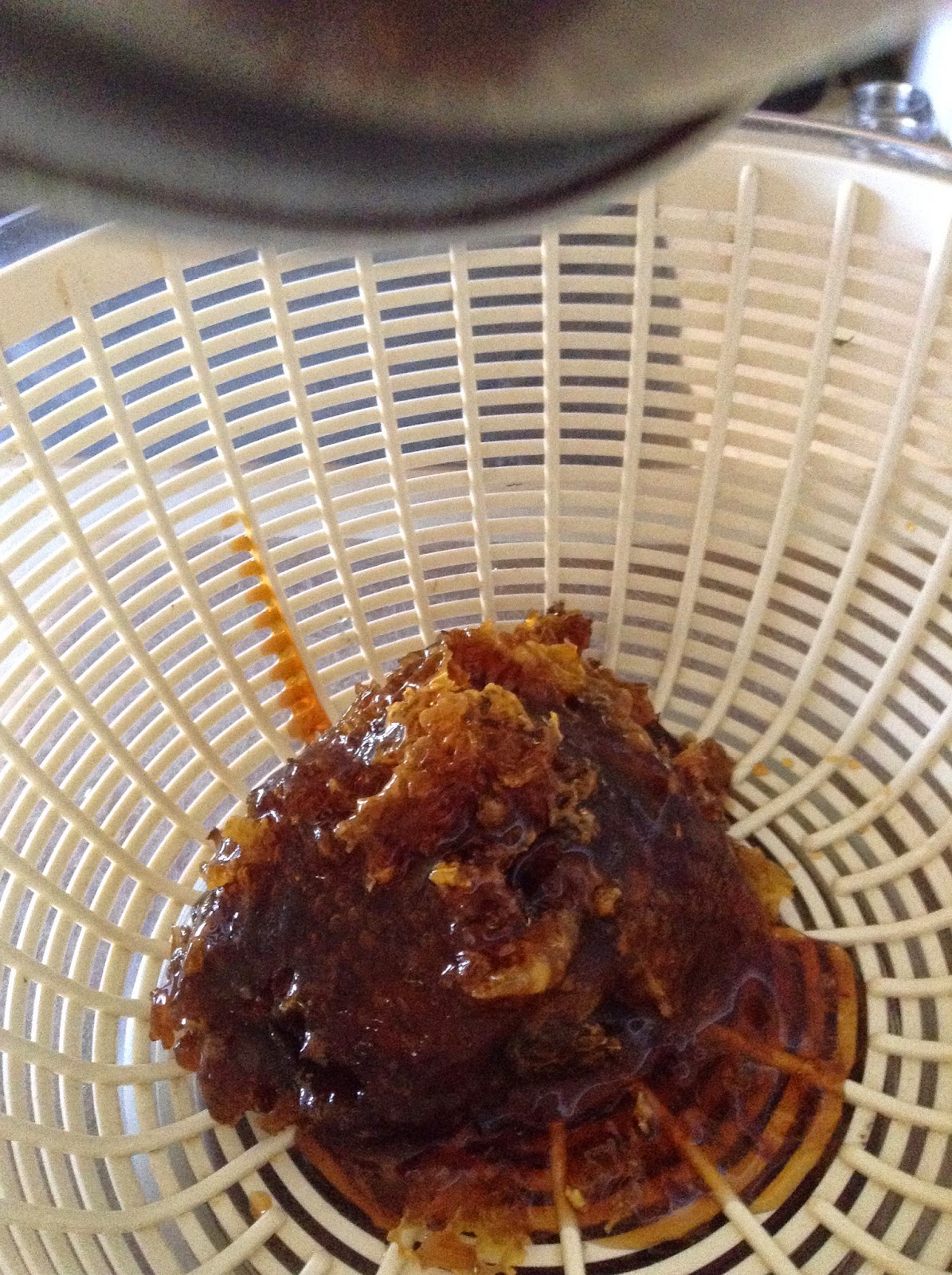 Then I had the thought to try the salad spinner, I scooped out wax and honey and put some in the spinner...

and spun it around a bit 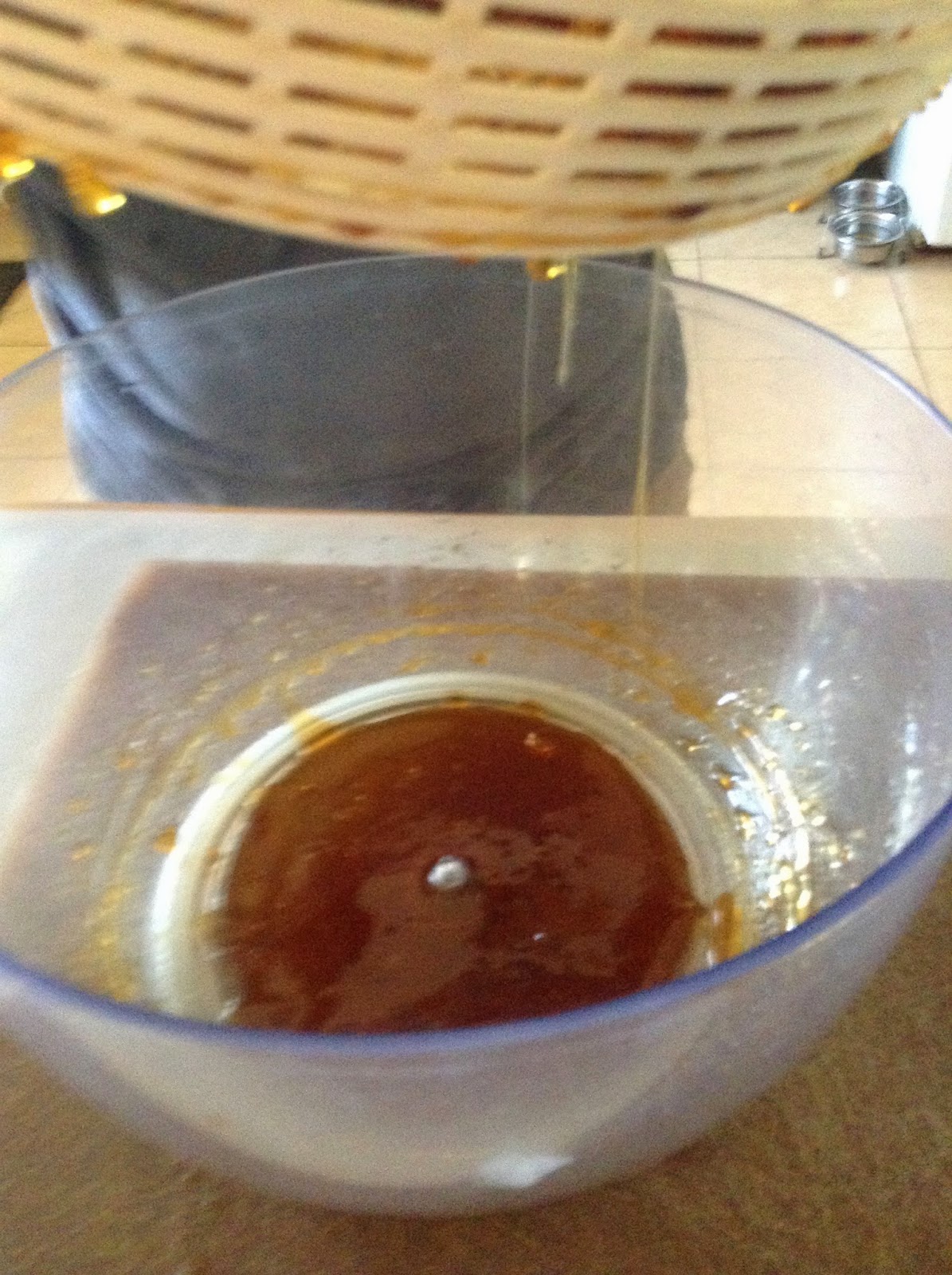 that worked, but it got so sticky, it wouldn't have been feasible for more than a tiny bit of honey.

In the end the stainer did the job, and there is not photo because my photographer ( Juliette) was mainly talking and eating honey.. 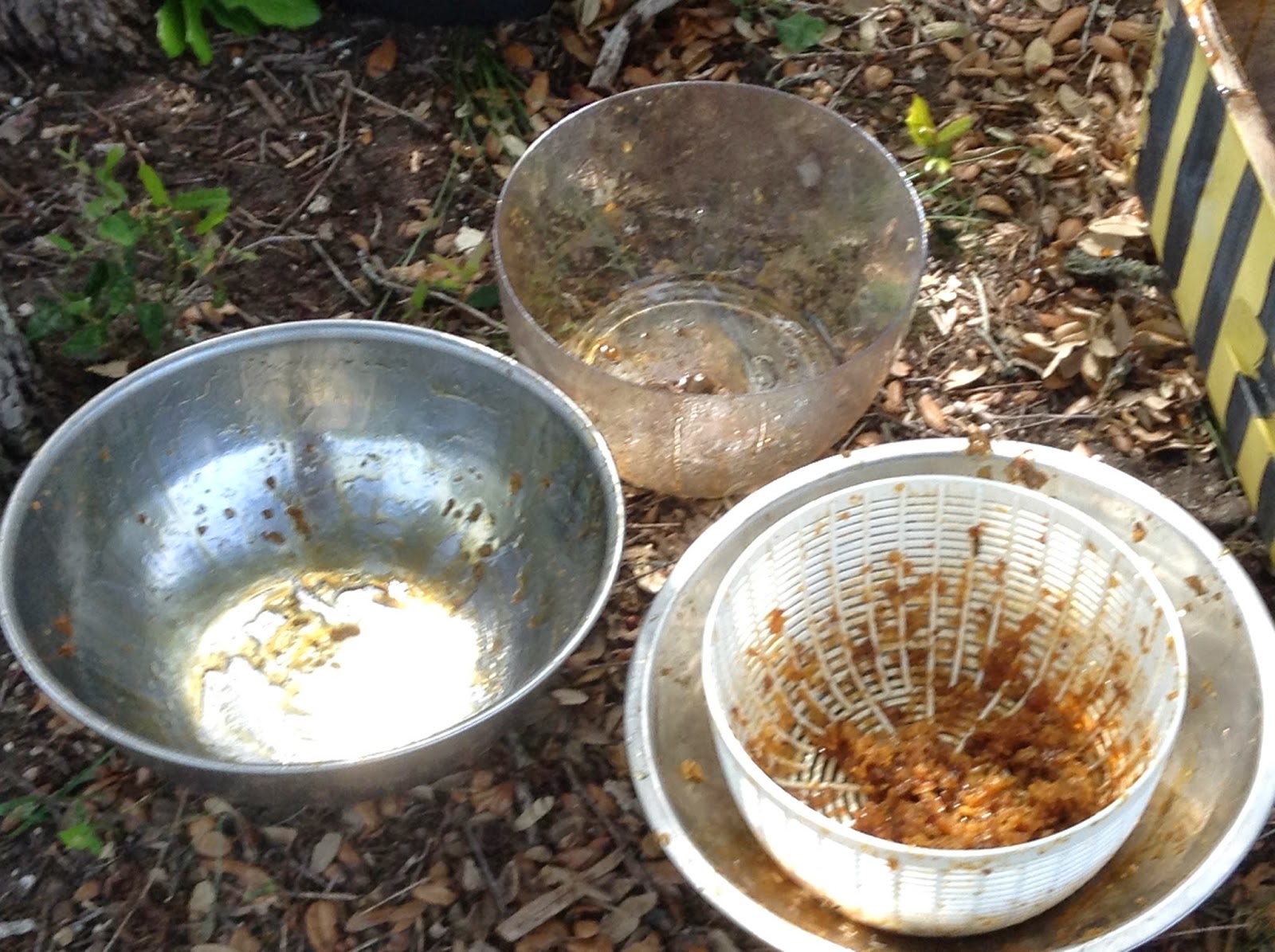 I gave the bees the dirty bowls which they cleaned up fine. 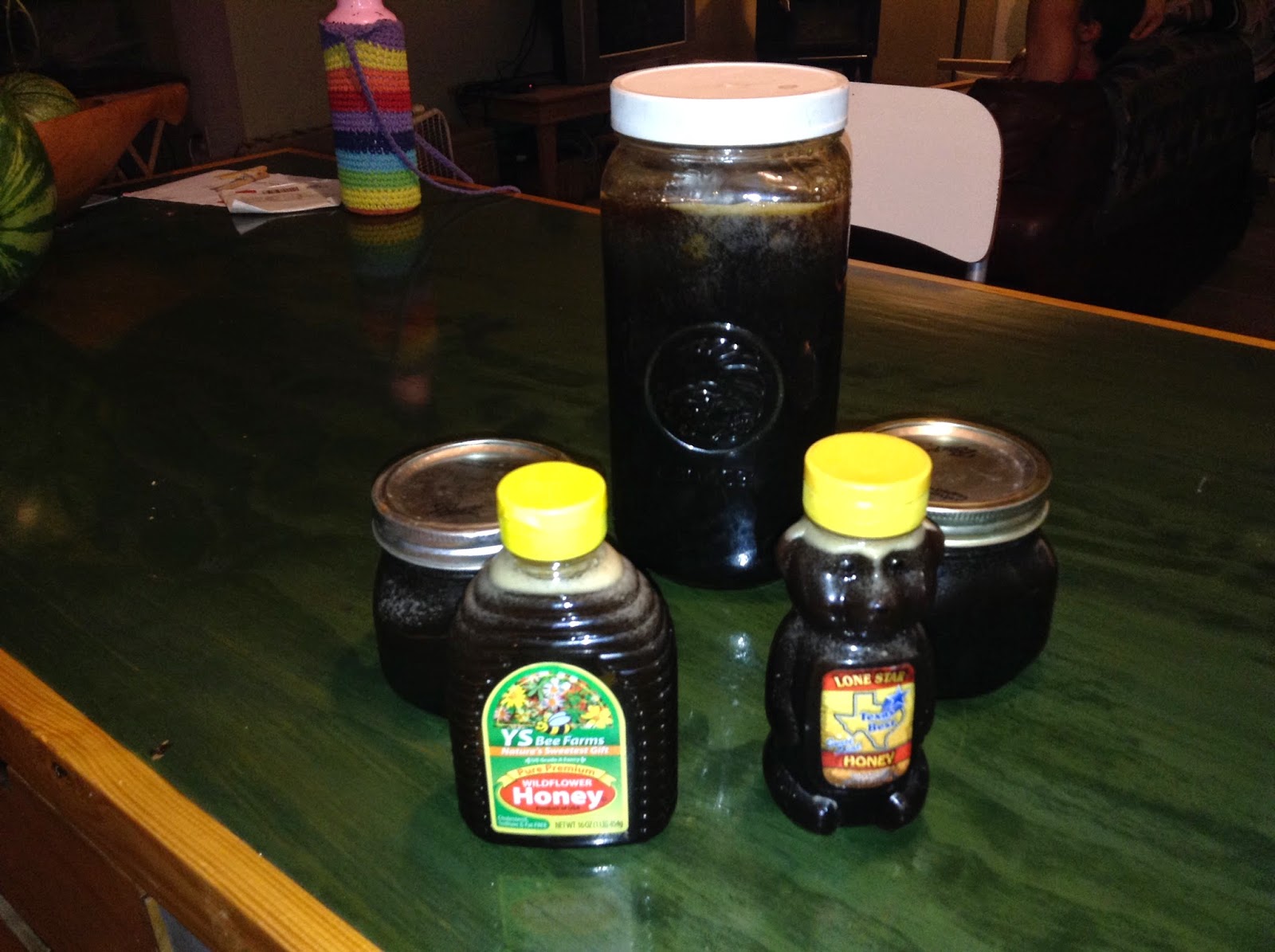 I got about 3/4 of a gallon from 3 frames.
The color is so dark!(although not as dark as the photo looks) It tastes kind of like caramel.

I read the color of honey is caused by what the bees fed on, (wild flower mix with golden rod makes dark honey)  I am assuming these bees also reused the cells a few times and there was probably quite a bit of pollen in the cells as well as honey.

The honey in the store is very different, it is ultra filtered to the point where there is no pollen at all,
which is crazy because that's part of what makes honey good for you! but by removing the pollen the honey source is pretty much undetectable... thus honey from China, India etc.. Honey in the store is also heated and watered down....